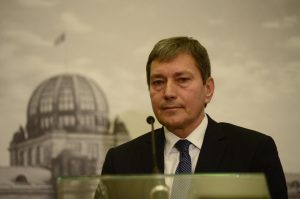 Azerbaijan and the Czech Republic are holding talks to sign a new energy agreement, Czech Minister for Industry and Trade Tomas Huner said in an exclusive interview with Trend.

The minister added that expert discussions on an inter-ministerial agreement on energy cooperation to be signed by the Ministry of Industry and Trade of the Czech Republic and the Azerbaijani Ministry of Energy are currently underway.

“The essence of the document is to underline the strategic importance of supplies of Azerbaijani oil to the Czech Republic, but also to facilitate the cooperation in the development of alternative energy sources (e.g. the hydro power and other green energy sources) and create conditions for the involvement of entrepreneurial subjects in energy projects in both countries,” Huner said.

Huner said that in this context and in connection with signing of the aforementioned international document, consultations on this year’s working visit to the Czech Republic by Azerbaijani Minister of Energy Parviz Shahbazov are in progress.

The minister added that another prospective field for expanding cooperation is the Southern Gas Corridor project.

“Potential supplies of Azerbaijani gas to the Czech Republic offer another possibility to diversify our energy sources,” the minister said. “This issue will be dependent on the political will of representatives of both countries.”

The Southern Gas Corridor is considered as one of the priority energy projects for the EU. The project envisages the transportation of gas from the Caspian region to the European countries through Georgia and Turkey.

At the initial stage, the gas to be produced as part of the Shah Deniz Stage 2 is considered as the main source for the Southern Gas Corridor projects. Other sources can also connect to this project at a later stage.